From Nordic: The Difference Between Classic Bluetooth and Bluetooth Low Energy

The naming conventions for Bluetooth technologies have changed over the years and still cause confusion to this day. Here is everything you need to know.

Understanding the differences between classic Bluetooth and Bluetooth Low Energy is a critical first step for any Bluetooth development project. Why do two partly-incompatible protocols share a name? What happened to Bluetooth Smart? Which protocol is best for your application? These are common questions from people new to the world of Bluetooth.

In order to fully understand the situation today, we must first understand how we got here.

The history of Bluetooth releases

Each time Bluetooth SIG releases a new version of the specification, it states a version number. Bluetooth 1.0 was released around 1999, version 2.0 in 2004, version 2.1 in 2007, and version 3.0 in 2009. If you open the Bluetooth 3.0 specifications, you will find that classic Bluetooth includes three modes: BR, EDR and HS (AMP).

The introduction of Low Energy

In short, any technology released by SIG can be called Bluetooth technology. In 2010, Bluetooth SIG merged with Wibree. The wireless technology was founded by Nokia, Nordic Semiconductor and other parties, with the aim of finding a lower-power wireless communication technology for mobile phone peripherals.

That means there is only one Bluetooth, which is the SIG's Bluetooth. The Bluetooth technology itself includes four types: BR, EDR, AMP and LE. Since LE was proposed in 2010 and is relatively new, people call the former BR/EDR/AMP technology ‘classic Bluetooth’ technology for convenience.

Don’t make the mistake of thinking that Bluetooth only has the LE mode after Bluetooth 4.0!

Initially, the SIG promoted Bluetooth LE as ‘Bluetooth Smart’ to distinguish it from the classic version, which used the standalone term ‘Bluetooth’. Also, ‘Bluetooth Smart ready’ was used to represent the dual-mode Bluetooth that would support both variants.

Instead of spreading the brand and bringing clarity, the naming confused both consumers and developers. SIG then decided to stop using these names and bring everything under the Bluetooth 4.0 umbrella.

The Bluetooth 4.1/4.2/5.0 released by SIG includes both Bluetooth Low Energy and classic Bluetooth. So when developing Bluetooth applications, you must be clear which version to use as they work differently.

Generally speaking, classic Bluetooth is mainly used for audio such as wireless telephone connections, wireless headphones and wireless speakers. Bluetooth Low Energy is more often seen in wearable devices, smart IoT devices, fitness monitoring equipment, and battery-powered accessories such as a keyboard. Of course, classic Bluetooth can also be powered by batteries, but LE's power requirements are lower. In some cases LE devices can even be powered by button batteries. 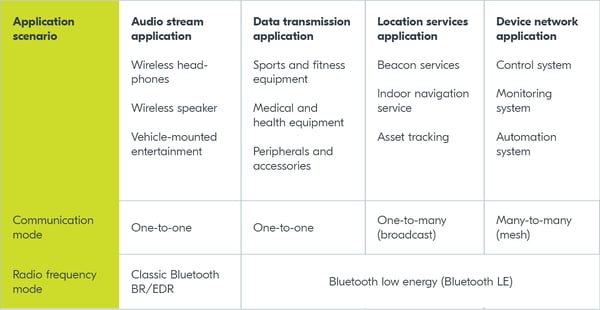 Smartphones can work with both

That said, there is a dual-mode Bluetooth device in the market, which supports both Bluetooth LE and classic Bluetooth. Cell phones are the most common example. Most modern smartphones can communicate with both classic and LE devices.

To achieve this, smartphones use a time-sharing mechanism to communicate using both Bluetooth modes. Smartphones allow dual-mode Bluetooth chips to continuously switch between modes to support both Bluetooth LE devices and classic Bluetooth devices.

Whether it’s Bluetooth LE, classic Bluetooth or dual-mode Bluetooth solutions, fully understanding and appreciating the differences between them is an important step in choosing the most suitable solution for your IoT project.